Today we are going to visit El Desierto de la Tatacoa, also known as the Valley of Sadnesses. What a beautiful way to describe a desert. We will go in the evening because it is known for being the best place on earth to observe celestial bodies. Read more.

How do you like my “Popo Play-Doh” earrings, designed exclusively by DFV? 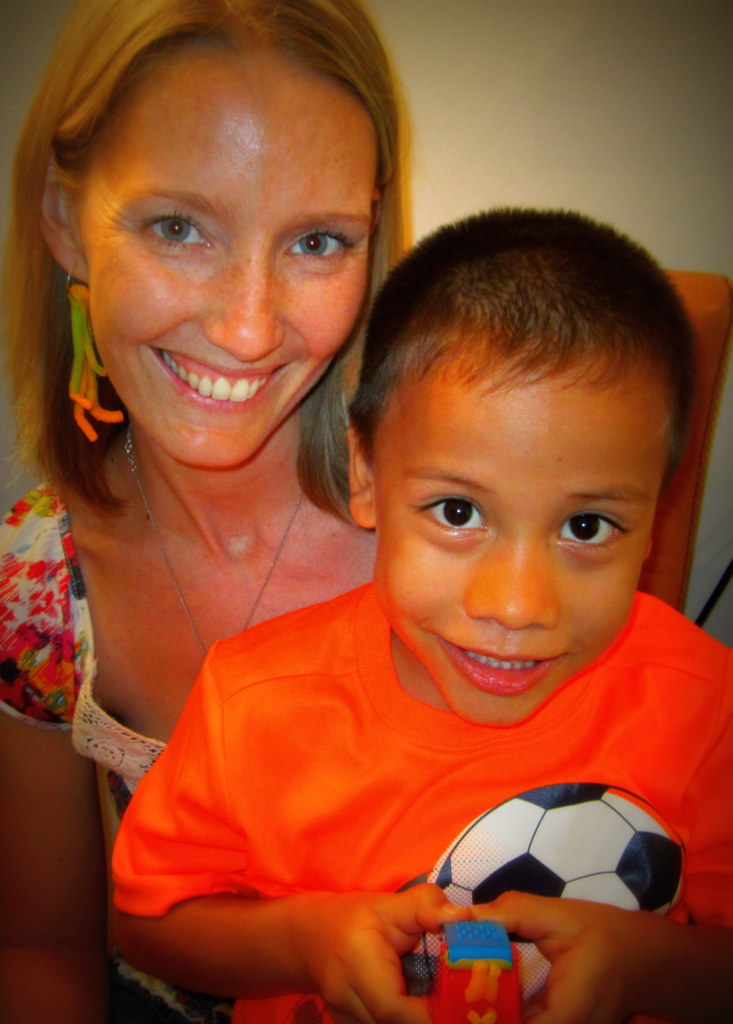 Diego is officially and legally (and permanently) ours! Some hours ago Olga Elena and Sorany told me to grab the passports, head down to the courts, and give my signature. I’m not entirely sure what happened (I personally think Olga Elena worked some lawyerly magic – that or the judge was overwhelmed by the mounds of paperwork that came with this family), but we’re very happy. Thank you all for the prayers and comments from the last few days.

As for timelines, we’re still a bit unsure when we’ll be leaving Neiva. My guess is this weekend (possibly tomorrow). Olga Elena needs to complete a few more tasks, but the important parts are complete. Now the ball pretty much enters the American court – what with doctor’s visits, passports, and visas. But at least it feels like we’re moving forward.

Anyway, we of course had to post Diego trying to say his crazy new Dutch last name (the one of the girls still cracks us up).

It appears that our court keeps asking for more and more paperwork. Our lawyer doesn’t seem to think this is an abnormal process. Unfortunately a possible date for the Sentencia keeps getting pushed back…and back. Right now Olga Elena thinks we might hear something (whatever that means) “next week Wednesday.”

We’ll try our best not to have the boredom of Neiva dampen our resolve for another week. In the meantime, we’d ask for prayers to make the time fly by fast (and our poor daughters to feel the Skype love).

Diego and I spent a good part of the morning wrestling. It seemed like a particular guy thing to do. He was full of energy, I was full of energy, so we decided to try some WWE moves using the sofa. He loved it, even when he got a tiny shiner when his eye hit my knee (he tried to do a body slam from the armrest). It was fun, lots of laughter and yelling and hugging.

For so long – three years – Diego has been an abstract thought, the “what if” person in the family. When we adopted them, the girls didn’t know they had a younger brother, much less that the Bienestar had asked us to consider adopting him. So we taught them to pray for him (Let’s pray for Diego. “Quien es Diego? Tu hermano – your brother. Oh, ok.”), but waited until the adoption process was well on its way before telling them we were trying to bring him home.

Now – finally able to play with him, cook for him, teach him, hug him, and laugh with him – I’m struck by how natural it feels. Perhaps this is because we’re already parents, capable (somewhat) of dealing with the ups and downs. Perhaps it’s because he’s been a prayer on our hearts for 3 years.

But part of it is how easy a kid Diego is. I feel that I should qualify that statement because this is way too early in the game to make such statements. That said, any adoptive parent worth their salt prepares for the worst and is happily surprised when the worst doesn’t manifest. In the nearly 2 weeks of being a family we’ve had to do very little discipline nor have had any major meltdown (which, truly, surprises me to no end).

That said, Diego finally cried today. He’s pushed a few boundries (gotta see where the edge is after all) and got a significant timeout. The parenting skills kicked in (try agains, lots of practice, clear communication, natural consequences) and by dinner we were back in shape.

Tomorrow we’ll play some more. We’ll walk, maybe swim a bit, try out new English (Ren’s sneaking in some schooling). I really, really miss my daughters. But I’m happy to wrestle with my son.

Eventually you hit the point of home cooking craving.

Some countries this happens fast (ie – Egypt, which has terrible cuisine – see mulukhiyah). Some countries it rarely happens (ie Brazil, with its fruits, beans and rice, and incredible churrasco).

Colombian food seems be either bland or fried (and oh my goodness do Colombians like to fry things). That’s not to say it’s bad, just a bit boring. We Vander Veens tend to cook very flavorful foods at home, so this is an adjustment.

All of which is to say I was very excited to find this at the supermarket nestled between cheese and yogurt. I’m now putting it on nearly everything, including my cereal. Diego thinks it’s way too hot. I tried to tell him we eat tacos once a week in the states. He just looked at me in confusion.