Diego really likes fish. While walking to the Supermercado we were hooked into a little restaurant for lunch. A strong torrent of words describing different foods – mostly dishes I couldn’t even hope to translate – poured out of the waitress’s mouth and, in the end, I received baked chicken with lentils and rice, Ren got the same only fried, and Diego happily set himself to a big (whole) fried fish.

He especially liked playing with and then eating the eyes!

Yesterday we walked to Rio Magdalena, the most important river in all of Colombia. Last time we were here it really wasn’t that impressive as it was running pretty low. Not this time. We’ve had rain nearly every night and the rio was big, brown, and fast. The street we took to get there spit us out at the fish market. Wooden canoes filled with catfish looking, zebra striped 3 foot fish. Next to the fish market was a big log, barely on fire, with half a pig cooking on a metal spear. Very cool. On the way back we passed a Pentacostal church (lots of shouting) where all the men wore identical pink shirts. Two of them were dragging a rolled up mattress to the edge of a canal (where I suspect it will eventually end up in the Rio Magdalena). The scene struck me as odd, sort of like it was the start to an Elmore Leonard novel.  Oh, and a big iguana crawled out of the canal as well.

We tried to watch part of the Super Bowl, but Diego seemed to think football didn’t make much sense so we put on some Tom and Jerry cartoons. We didn’t get the commercials down here, so no big loss. Tom and Jerry is about as violent as American football anyway.

Today we decided to try and find the big San Pedro / Exito Plaza. This was the plaza were we ate hot dogs and rode rides with Chris and Mary and all the kids. It’s changed some. For one thing, all the rides are inside a tent now on the second floor of the mall. The walk was probably a good mile or more. We could see the Plaza from the top of our apartment, so we sorta winged the direction to head towards it and asked questions along the way.

We had to go to Exito because we over estimated on Diego’s clothing size. Many of the ropas that we brought are too large (although Nicholas’s stash of clothing fits the best…thanks Chris and Mary!). Clothing is expensive in Colombia (or at least it is in the dozen or so places we’ve looked) – so thank goodness there’s a washing machine in the apartment.

Anyway, the entire trip took up probably close to 3 hours – which made the day go by fast. He was tired by 8:00 and, after singing lullabies, fell right to sleep. Tomorrow’s the big day. The Bienestar crew comes at 8:00 am to check and see if we’re a functional family. I’d say the answer is a definitive yes.

One of the first things you do as an adoptive parent is buy shoes. We brought down a pair of Reds flip-flops but they barely fit his feet so we headed on over to the Carrefour and tried to figure out Colombian shoe sizes. The ladies in the shoe aisle thought us peculiar (“You don’t know his shoe size?”) until we explained that we’ve only been parents for a few hours. He wanted Spiderman genericcrocs, but they didn’t have his size. This didn’t faze him much and he was happy to get boring old white crocs (although we did return the next day to buy Spiderman sneakers).

And that’s the thing about Diego, he pretty much takes everything in stride.

Getting to know one another is fun. Diego is shy, slow to talk around new people. He does love to smile and when he gets excited (like when watching a movie), his whole body jumps with belly laughter. He doesn’t say his “S”s and “R”s, but we do alright communicating. He likes kicking the ball around in the park, coloring, blowing bubbles (Mami very wisely brought “spill proof” bubbles this time), and watching TV.

With a lot of adoptions you have this honeymoon period where things are wonderful and everyone gets along (followed by a hard work period where everyone figures out how to function as a family). We didn’t have a honeymoon period with the girls (it was all hands on deck from the first day), and it’s too early to tell with Diego. This is a long way of saying that I don’t want to read too much into these past days, but all in all, he’s a pretty easy kido.

Now our challenge is fighting the waiting and filling up the day. Just as I remembered it with the girls, this is one of the hardest parts of the trip. We live such packed lives in the states (between family, school, and work) that it feels very foreign (pun intended) to have so much time on our hands. We fill it getting to know each other, walking a lot, creating elaborate ways to obtain food (which supermercado today? which panderia looks safe enough to eat at?), walking to the park and playing futball (see below), and chilling out.

Tuesday will be here before we know it and then (hopefully) our paperwork enters the courts. On that note, please pray that we don’t get placed in Court 4 which, apparently, doesn’t move fast at all (Court 1 is the jackpot).

It was a clear day on the flight from Bogota to Nieva and this time I made sure to look out the window to try and get an understanding of the geography of Colombia. Here’s what I saw: mountains, mountains, coffee plantation (I think), muddy rivers, and some deserts. Basically it looked like west Texas with more hills. Nieva snuck up on us on a bend of the Rio Magdelena and then, just like that, we’ve landed in the heat.

We’re renting an apartment flat. It’s huge, with two bedrooms, a kitchen, and a pool on the 6th floor. Right across the street is a huge Carrefour (like having a Target in your front yard). There’s artwork – sculptures – that I’m trying to figure out where to hide because I’m pretty sure they’re going to break, given their current location, when Diego arrives. We’re about 9 blocks from the city center (actually pretty close to the BienEstar). Very cool.

The one downside about the apartment is that, while it does have internet, it’s maxing out at high dial up speeds (capped WiMAX). Won’t be doing Google Hangouts or Skype on those speeds. Oh well. Go with the flow.

We walked around Neiva a bit, visiting old sights. Next week starts the new school year, so the markets were packed with people and knickknacks. Two obvious gringos in a crowd!

This morning we went to the Bienestar to have our meeting. Ren wants to write about that, so I’m posting a few images of travels and will pass the computer to her. Today’s pretty much a hurry up and wait day (like many of them to come).

We arrived, somewhat late, into Bogota. Bogota has a new airport, all shiny and modern with everything rated “Green”. Customs was a breeze (I was mistaken for a Colombian…awesome) and the fun conversation of the evening was with two American kids (20ish) who wondered if it was okay to sleep in the airport (my two cents, go for it). They were basically bumming through South America for the next few months. He even had the stereotypical guitar slung over his shoulder.

Casa Latana is pretty much exactly the same way I remembered it from 3 years ago. The morning we sat with a French couple who didn’t speak much English or Spanish – so lots of puzzling out latin roots and making fun hand gestures. They’ve two little Colombian girls with them. We also had a short conversation with a couple from Indiana. They’re off to adopt two kidos from a fairly remote part of the country. Fun times.

We took coffee with Lucia, getting caught up on all the adventures in Colombian adoptions. She’s wonderful, matter-of-fact, and has the excellent ability to communicate quite well with facial expressions. A good 95% of my brainpower at the moment is spent trying to switch linguistic modes. It takes a while for the ears to adjust. Any body language is helpful.

We catch the plane to Neiva in 2 hours. Looks like we won’t be staying at the Hotel Picande (apparently an exciting political reunion is happening there…best to avoid). I think we’ll be renting an apartment – which may have it’s pluses in that we can cook our food.

Got about 2 hours to burn at Atlanta airport. Eating soup and stretching the legs. Next up: 5 hour flight.

Last chance to catch Gluten Free labels on menus. I can’t say I’m looking forward to eating arepas for the next 4 weeks. But I can’t wait to eat the fried corn dough thingamajigies that Chris and Mary make when we get together.

It was really hard to say goodbye to the girls this morning. I’m having a hard time wrapping my mind around not giving them hugs and kisses for a month. Thankfully we’ve our technology to in place to shorten the distances. 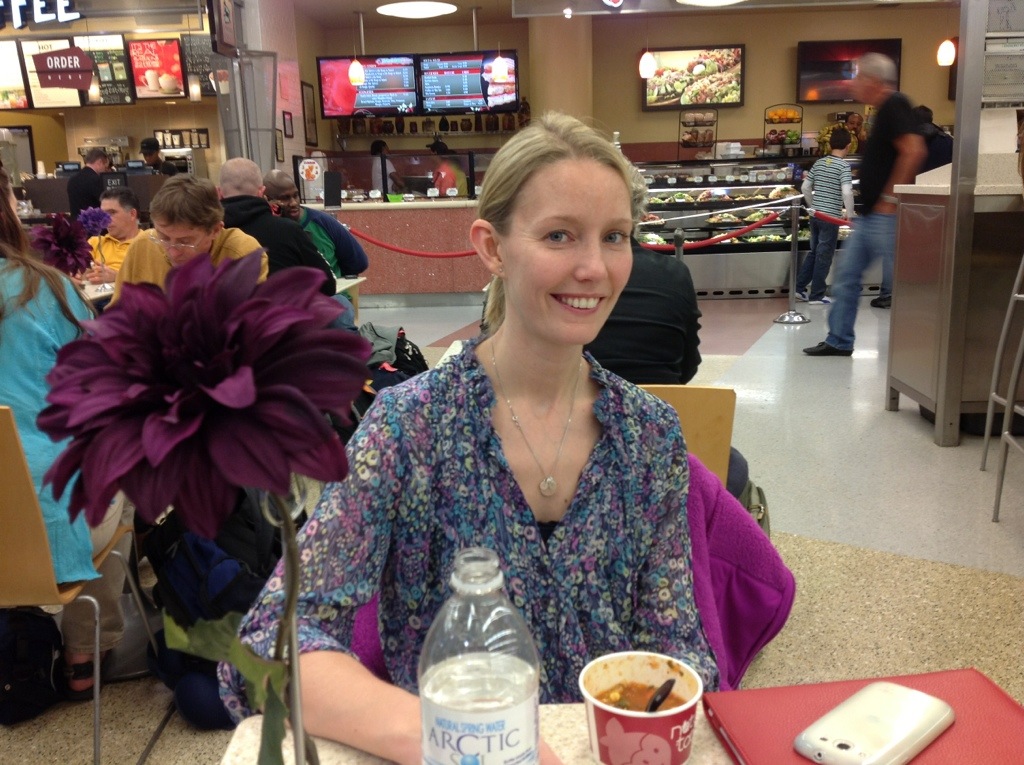